RenalGuard Solutions has appointed JS Medical as their new UK and Ireland distributor.

JS Medical is delighted to be appointed as the UK and Ireland distributor for the RenalGuard Therapy® technology, designed to reduce the incidence of Contrast-Induced Nephropathy found in the millions of at-risk patients undergoing cardiovascular imaging procedures by managing real-time fluid balance in conjunction with interventional procedures involving contrast media.

RenalGuard measures a patient’s urine output and automatically infuses hydration fluid based on that urine output. The system is designed to induce high urine rates, which have been shown to protect the kidney from a range of insults.

Having worked alongside Jim Dillon, CEO of RenalGuard Solutions, for several years building the RenalGuard presence internationally, we are delighted to now represent the company in the UK and Ireland markets.

A number of studies have demonstrated RenalGuard’s ability to protect patients from AKI following catheterization procedures when compared to the standard of care, including: MYTHOS, which 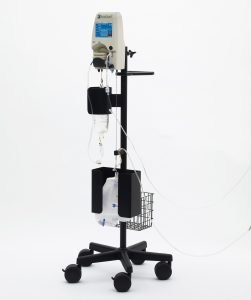 found RenalGuard to be superior to overnight hydration; REMEDIAL II, which found RenalGuard to be superior to sodium bicarbonate hydration; Protect-TAVI, which reported a significant reduction in post-procedural acute kidney injury (AKI) following transcatheter aortic valve replacement (TAVR) when using RenalGuard during the procedure, compared to standard therapy; and AKIGUARD, which showed significant improvement in long-term outcomes when using RenalGuard vs. standard therapy.

Clinicians interested in discussing the benefits of RenalGuard for their patients should contact Murat Celebi, Clinical Marketing Director, on +44 (0)1234-888955 or by email via info@js-group.global.

NICE did not develop or endorse the COVID-19 decision support tool claimed in some media articles today. Nor did NICE develop the Clinical Frailty Score, however we have recommended its use in our COVID-19 guideline on critical care in adults in whom it has been validated.